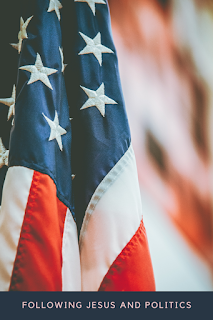 Politics is very seductive. It promises the ability to direct the course of a nation.
It is this feature that causes many people To get worked up around election time. The belief  we have is that if the right people are elected, then the United States will head in the right direction.
As a result, followers of Jesus can get distracted by politics.
Since we are passionate about seeing God’s will done on earth as it is in heaven, we can tell ourselves that it is essential for our country to be influenced by God’s laws and will.
We see this on both sides of the political aisle. Conservatives will emphasis the need to have a country whose laws are based on Biblical truths. Progressives will emphasize the need to have a government that works to bring justice into the world.
In both cases these Christians claim that their politics and the way they vote demonstrates their faithfulness to Jesus. 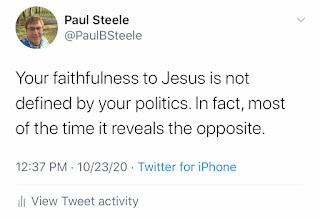 Our faith is not defined by our politics.
Remember, politics is about trying to rally support for certain candidates, policies, and causes. What inevitably happens is that half truths and distortions are used to convince us to support them. The politics of this world depends on propaganda for the support of people.
In contrast, the way of Jesus is about truth. Followers of Jesus seek to speak truth into this world. This means we can’t just use the same talking points the politicians and their supporters use. We have to seek and speak the truth, even when it goes against people and policies that we may support.
Politics requires the use of force. The primary way the world seeks to gain compliance among people is through force. Every governmental policy and law is enforced through the threat of force. We can see this in the multi-tiered law enforcement agencies that exists: local, state, and federal. Without this extensive police force, the will of politicians could not be accomplished.
In contrast, the way of Jesus is the way of compassion and love. According to Jesus, we are able to be righteous people when we love God and when we love our neighbors. Our job is to teach people to do the right thing, not by threatening them, but explaining the wonderful love of God and serving them in their needs.
To choose the way of politics as our primary focus is to say that we don’t trust God’s way of bringing transformation into this world. It demonstrates that we are more comfortable with using the tools of propaganda and force to direct people’s lives than we are trusting God’s Spirit to bring transformation.
This is not to say that it is wrong to be involved in politics or to ignore voting.
William Wilberforce is a great example of using the wheels of politics to bring about a much needed change in society by ending the slave trade in the British Empire. Politics, when used with wisdom and love, is certainly one of the tools available to Christians to make a difference in this world.
My concern as a pastor and disciple of Jesus are Christians whose entire Facebook page is filled with nothing but political posts, who condemn the other side as evil, and who proclaim that the only way to save the United States is to vote for the candidates of their party. This is dangerous for a Christian’s personal discipleship and it hinders the outreach of the Church.
Be mindful of who you vote for and what issues you champion, but don’t equate that with your faithfulness to Jesus. God has His own agenda and that is what we should commit our lives to supporting.
at October 24, 2020