Presidents and the Constitution 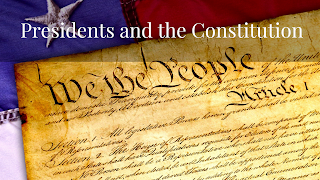 We are a week away from determining the president of the United States.
While there is always a big push to get people out and vote, there seems to be more of an urgency every 4 years when it comes time to elect a new president.
This is sad. Not because I think more people should be voting, but because of the great emphasis put on this one position.
The founding generation feared a powerful executive and tried to make it so one person did not have so much influence.
That reality has eroded over time.
Now the president has so much power that every presidential election becomes about determining which direction the country will move.
Gone are the days when we should really be asking one question when it comes to electing a president: "What is he/she constitutionally allowed to do?"
Historian and author, Brion McClanahan puts it this way in 9 Presidents Who Screwed Up America: 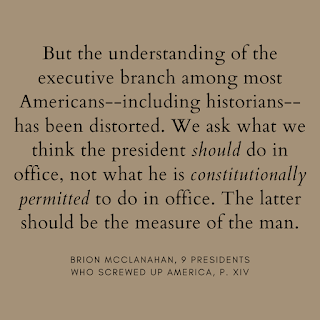 Is "constitutionally permitted to do" even a category we think about when it comes to evaluating presidents and electing new ones? Was that challenge even offered during the debates?
The more power we allow presidents to have the more we move away from the constitutional republic created by the founders and closer we become to being a dictatorship.
This is why it is crucial for us to know that Constitution of the United States, so we are able to point out when it is not being followed. Apart from that, it doesn't matter who becomes president, we will just mover further down the road to tyranny.
at October 27, 2020