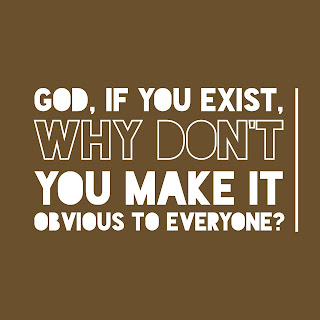 Questions are an important part of having a conversation.
They help us find out more about the other person and they provide us with information that we didn’t have before.
If I am going to have a conversation about God, then certain questions are going to come up.
Truth be told, while I am a pastor, I am not a “Bible Answer Man.” There are many things about Christianity, the Bible, and God I have questions about.
The process of answering questions helps us think through what we believe and provides us the opportunity to look at the world from a new perspective.

This particular question is a common one. It would be reasonable to assume that if God wanted everyone to know Him that He would make it easy for people to find Him.
I think at the heart of this question is this statement: "God if You would just reveal Yourself to me then I would believe in You." They justify their lack of faith because God, if He even exists, hasn’t made it obvious to them.
I can understand why this is a difficulty to believing in God. There are times in my life that I wished God would just prove His existence. Yet, I suspect that wouldn't impact my long term faith very much.
Think about two Biblical examples of people who experienced God in a miraculous way:
It is amazing that Israel doubted God and disciples doubted Jesus after all they experienced. We tend to think if we were in their place and were able to witness miracles and see the risen Lord face to face that we would not doubt. I am not certain that would be the case.

These examples show us that a faith built on the evidence miracles is not a sustainable faith. Time has a way of eroding our experiences. Given enough time even the most awesome miracles would loose their impressiveness.
Aside from what theologians call general revelation (the evidence of God discovered in nature), God doesn't make Himself known to everyone. It might be impressive for God to reveal Himself in all His Holy splendor, but how long would that make an impression on people? At the very least it would be something He had to do every generation.
There is nothing God can do, except what He will do when Jesus returns, that will convince everyone that He is real.
That doesn't mean God keeps Himself hidden from people.

Then God said, “Let us make human beings in our image, to be like us. They will reign over the fish in the sea, the birds in the sky, the livestock, all the wild animals on the earth, and the small animals that scurry along the ground.”
So God created human beings in his own image.
In the image of God he created them;
male and female he created them. (Genesis 1:26-27; NLT)

God created human beings in His image. To be created in God's image means that we are designed to be His representatives in this world, to demonstrate His character. In other words we are to be walking, talking, and breathing revelations of God. The world should know God because of His people.

This is why Jesus told his disciples:

“So now I am giving you a new commandment: Love each other. Just as I have loved you, you should love each other. Your love for one another will prove to the world that you are my disciples.” (John 13:34-35; NLT)

The world will know that God exists through the lives of His people. May we be the evidence people need.