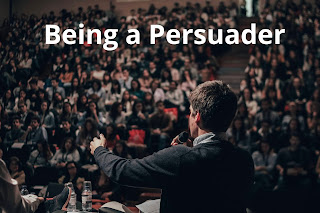 Part of my job is to persuade people.
That is what I seek to do when I preach or when I teach (yes, there is a difference, but that is for another post). I want to convince people that there is a change the need to make in their lives.
This is not an easy task.
If I had to base it on percentages, I would guess more often than not I fail to persuade people the way that I should. Yes, they may leave agreeing with what I said, but they won’t be led to make in changes in their lives.
At the end of August Michael Malice tweeted this: 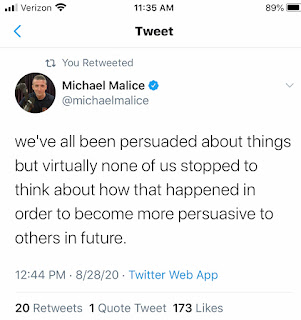 I have pondered this thought off and on since then.
Here are a few of the thoughts I have had about persuasion.
First, persuasion happens when a person is ready to make a change. That is what happened to me when I shifted away from a standard Rush Limbaugh conservative Republican worldview to a libertarian/Christian anarchist worldview. It was 2008 and I noticed more and more inconsistencies with what the Republicans were doing and the limited government beliefs I was told Republicans had. I remember a phone conversation I had with my brother when I told him about my frustration and he said, “Check out this guy named Ron Paul.” I did and the rest is history.
That change happened because I was ready to make a change.
Second, persuasion is easier when there is a trusted relationship. All my brother had to say was, “Check out Ron Paul,” and because of our relationship I did it. This means a good relationship is an important part of being able to persuade another person. When you trust the other person you are more likely to listen to what they have to say.
Persuaders need to do what they can to build relationships with people.
Third, there needs to be a level of expertise involved. It is hard to persuade people when a quick Google search reveals the holes in an argument. Two people who have influenced me intellectually have been Tom Woods and N. T. Wright. Part of the reason is I accepted their arguments is because of a level expertise they bring to their work. That helps me trust what they have to say
Persuaders need to demonstrate that they have a good understanding of the subject they are talking about.
Fourth, persuasion is a journey. More than likely, the beliefs you hold didn’t magically develop overnight. Rather, the came into place over a period of time as different influences shaped those beliefs. We can’t expect people to take they same journey that we took in the course of a single conversation or a 30 minute sermon. We need to be willing to take people along one step at a time. In my early days of being a libertarian I was quite obnoxious, everything seemed so clear to me, and I thought if I could just be loud enough people would see it too. Big mistake.
Persuasion takes time as we walk people through the process of changing their mind.
Fifth, persuasion takes integrity. When we see that the person lives what they believe, it helps us to listen to them. In college, my Christian Ethics professor’s wife had Alzheimer’s Disease. He brought her to class  each day. The way he treated her made an impression on the group of friends I was a part of and we all talked about having that level of love for our wives someday. He influenced us because he lived the Christian life that he taught.
Persuaders need to have integrity. Nothing causes a person to loose influence faster than discovering that he/she doesn’t live what they teach.
If you want to persuade people to make a change in their lives, take some time to think about that process. Persuading is not as easy as it sounds, but it is worth the effort to figure out.
at October 29, 2020

We love to talk about how busy we are.  In fact, for many Americans, being busy is how we convince ourselves that we have worth. It means th... 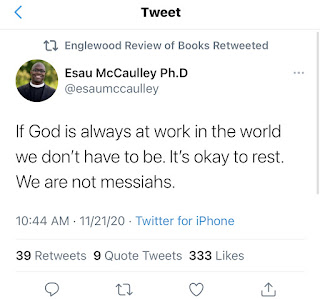