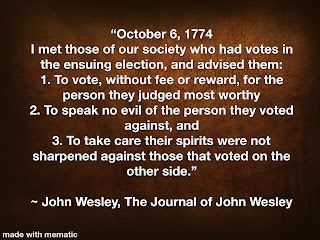 One of the great questions that I have wrestled with in my adult life is the relationship Christians are to have with politics. I think politics hold a danger for followers of Jesus that isn’t widely talked about or even acknowledged. It is just assumed, at least in the United States, that Christians should be politically active and vote.

To merely suggest that there might be a different way to look at things invites comebacks such as, “Elections have consequences.”

That is true, but that doesn’t answer the question about the proper role politics is to play in the lives of Christians.

When thinking through these questions I find it useful to go back and discover what earlier questions thought and taught. Recently I came across the above advice from John Wesley and thought it was worth considering.

What can we apply to our lives from this advice from John Wesley?

Second, we judge a person's worthiness for political office by two factors. The first factor is whether or not they follow the constitutions that are the restraints placed on the government. Romans 13:1 says, "Everyone must submit to governing authorities. For all authority comes from God, and those in positions of authority have been placed there by God." I believe that in a Constitutional Republic, the governing authorities are the constitutions. That is why a person's worthiness to represent you should be based on their willingness to uphold and defend the constitution. The second factor is their integrity. A person's character is an important factor to consider when determining whether or not they should represent you.

Third, it is crucial to remember that everyone is created in the image of God and therefore deserves our respect. You may not agree with the other side, but that does not give you the right to talk evil about them. In the long run, it is far more influential to provide a reasonable defense for your ideas then it is to declare the other side's candidate as evil.

Fourth (which I think is the most crucial piece of advice on the list), guard your heart. There is a danger that is lurking in politics for us who follow Jesus. We have to be very intentional to not dehumanize people or see people who disagree with us as the enemy. This happens all the time on Facebook, people who follow Jesus, yet when it comes to politics, they call people who disagree with them politically idiots, mentally ill, and even demonic. This is wrong. Christians need to do what we can to avoid falling into the trap of making enemies out of our political opponents. Not only does it damage our ability to demonstrate God’s character in this world, it also opens our hearts and minds to the corrupting influence of Satan.

Politics, like all things of this world, needs to be approached carefully. Followers of Jesus need to remember that there is a danger in putting an emphasis on voting and politics, because when they are mishandled they end up warring against our soul. This is why it is important for each of us to think through the role politics has in our lives.

John Wesley provided good insight for how we should vote, may we have the ears to hear what he has to say.