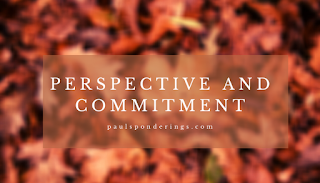 Our perspective on the world is limited.
Even if we stayed plugged into the news we would still be limited to those stories they decided to run.
As you can see, this is not an ignorance of choice or laziness, but of reality. The body in which we live is confined to one place in time, our minds can only absorb so much information, and what we do know is colored by other people’s perception.
This reality makes it impossible for us to fully understand what is happening in the world and the best way to precede. What seems like an insignificant act in the moment might effect our lives for years to come.

Take for example Joseph. We read about this man of faith in the Old Testament.
Joseph was the favorite son of Jacob, but his bothers hated him. That hatred changed the direction of Joseph’s life. He was sold into slavery by his brothers, thrown into prison for a crime he did not commit, and years later Joseph is made a leader in Egypt.

When Joseph as a slave he was a handsome young man. He was trustworthy and the things he did were successful. These things caught the attention his master’s wife. She tried to convince him to sleep with her. This wasn’t a one time proposal, but a constant request.
Joseph was alone in Egypt, no family, friends, or accountability partners. From his point-of-view what did he have to look forward to? Would he get married? Would he have a family? Would he ever move above being a slave?
It would have been easy for Joseph to rationalize the affair with Potiphar’s wife. There is no guarantee that he marry and this type of relationship was expected for slaves to engage in, it just needed to be kept secret.
From a certain perspective it made all the sense in the world for Joseph to give into her request.

What stood in Joseph’s way was his commitment to God.
Joseph was operating from a different perspective.
It might have been in Joseph the Slave’s best interest to sleep with the wife of Potiphar, but it was not in Joseph the Chosen One’s best interest.
Side note: this is pure speculation, but I believe that if Joseph choose the path of having an affair he would have remained a slave. He may have remained a favorite slave, but he still would be a slave.

The immediate consequence of Joseph’s decision to reject the advances of Potiphar’s wife brought a new set of hardship: Joseph went from being the head slave in Potiphar’s house to prison. He went from having a great deal of freedom, to no freedom.
Wouldn’t that be enough to make us question our decision?
Yet, this was the route God chose to prepare Joseph for his task.
At the time Joseph had no idea of what God had in store for him. All Joseph had was his commitment to God. That commitment allowed Joseph to trust God, even when the circumstances of life did not make sense.
We will never discover what God wants us to do if we never commit ourselves to following God.
Our vision is limited by time and space. We don’t know what will happen in the next hour, let alone what will happen a year from now. God knows what is going to happen, that means we need to trust Him and the guidance He gives to help navigate the ups and downs of life.
at November 23, 2020