President Trump represents an interesting moment in American history. Because we are living through it I think we should take some time to understand what is going on. 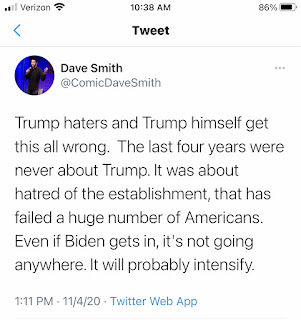 The “Donald Trump Moment” has little to do with Donald Trump and his presidency. It has everything to do an ever growing divide that is happening in the United States. A failure to understand this only ensures that this divide grows faster and faster.
When it comes to Donald Trump himself many Christians on the right and the left get him wrong.
On the left, people act like Donald Trump is uniquely evil. They love to tell us that Donald Trump is a racist, misogynist, and a divider. Yet, when you look at what he has done, you realize the President Trump is basically an 80s Democrat (he was a Democrat in the 80s - this reminds us that a conservative is just a progressive driving the speed limit). Remember, Donald Trump was a supporter of same sex marriage way before it was cool. The real objection that people have about President Trump is they don’t like his rhetoric. They prefer their presidents to act “presidential” when they bomb other countries. Seeing President Trump as evil keeps them from giving credit to him for the good things he has done.
On the right, Christians act like Donald Trump is God’s chosen instrument to save the United States. They will tell us that President Trump is a modern day King Cyrus. Relying on Isaiah 45 they paint a picture of how Donald Trump fits the model of a nonbeliever who is appointed by God to benefit faithful people. In a sense they see attacks on President Trump as spiritual opposition. Seeing Donald Trump as chosen by God prevents them from seeing the bad things he has done.
Seeing Donald Trump as evil or God’s chosen one keeps many people from seeing the truth about President Trump: he is a typical modern day president. He overreaches with executive power, believing he is the legislator-in-chief as well as commander-in-chief. The greatest thing that sets President Trump off from every other president is his use of Twitter. Should we expect anything less from a celebrity turned president in the age of social media?
What is the “Donald Trump” moment really about?
When it comes to watching Shark Tank, Mark Cuban is the one I always pay attention to because I felt like he had a better understanding of things. But with this tweet Mark Cuban reveals he doesn’t get what is going on. 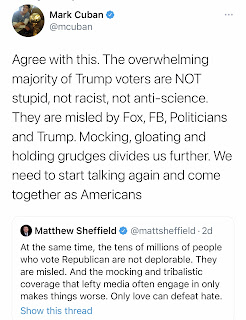 To simply explain away Donald Trump’s supporters by saying they are misled means you haven’t truly thought about what is happening. This moment really isn’t even about Donald Trump, he just happened to be in the right place at the right time. Replacing Donald Trump with Joe Biden is not going to make things go back to “normal.”
Why are things not returning to “normal”?
People weren’t misled by Donald Trump. What happened is that people heard what he had to say, and they projected on to him the type of leader they wanted to have.
There is a good portion of people in the United States who are tired of being told that they are racist, that the institutions they cherish are outdated and evil, that if they hold certain conservative views they are on the outside of polite society. They are fed up with being lied to by establishment people like Mitt Romney, John McCain, and George Bush. These people would say one thing and do another, never standing up for the people who voted for them.
The people who are tired and fed up with the establishment are the same people who formed the Tea Party movement, which then morphed into Trump Supporters.
These people are not going away.
One thing we learned from the election is that these people are growing. Donald Trump was supposed to be swept away. This seemed plausible because any sitting president with that much going against him: mainstream media (including much of Fox News), Hollywood, Cornavirus, a slumping economy, and the Deep State (which manufactured charges about Russian Collusion) wouldn’t have stood a chance. Even in the face of this adversity Donald Trump still out performed his 2016 showing.
I know many people who voted for Donald Trump and they all knew that he was a flawed person and president, but for them he represented a way to fight back against the establishment that opposes them and the things they love.
I understand where this group is coming from, because I had my own moment in 2008 with Ron Paul. When I was going through my disillusionment with Republicans and the political establishment Ron Paul was the one who said things that resonated with me.
If current trends with the election continue with the way they are heading and we have a President Joe Biden in 2021, things are not going to return to “normal.” The Trump supporters are going to morph into something new as they seek to fight back against the establishment. An establishment, that in so many different ways, seems to be against them at every turn.
This is what you need to understand if you are going to truly evaluate the Trump presidency.
at November 11, 2020