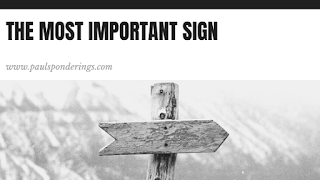 One day Moses was watching his father-in-law's sheep when something caught his eye. It appeared to be a bush that was on fire, but it wasn't being consumed.

Moses decided to investigate this strange sight. When He approached the strange phenomenon a voice called from the bush.

It was at this moment God called Moses to deliver Israel from Egypt.


Moses asked, "But who am I to appear before Pharaoh? How can you expect me to lead the Israelites out of Egypt?"

God answered, "I will be with you. And this will serve as proof that I have sent you: When you have brought the Israelites out of Egypt, you will return here to worship God at this very mountain." (Exodus 3:11, 12; NLT).


I find it odd that the evidence God provided to Moses that He would be with Moses would happen after it is all said and done. Moses would know it was truly God who sent him when he returned to the mountain with Israel in tow.

Now did Moses lack proof that his calling was from God?

There was the burning bush, the audible voice of God, and two signs: the staff into a snake and the leprosy of on Moses' hand.

Moses witnessed the ten plagues, the Red Sea divide, and the pillar of cloud/fire which led Israel.

All through his experience God showed Moses that He was with him.

Why was worshiping at Mt. Sinai the proof that God sent Moses?

While all the miracles pointed to God and showed Moses that God was with them, none of it would have meant anything without God's covenant.

It was at Mt. Sinai when God established a covenant with Israel. This covenant formally set them apart as God's people and separated them from all the nations of the world.

If God delivered Israel from Egypt but never established a covenant with them it would have made little difference to them. They would not be God's chosen people.

It was the covenant, the promise of God at Sinai which made all the difference.

Flash forward a few hundred years. Jesus turned water into wine. Not long after that he went to Jerusalem and cleared the marketplace out of the Temple.  He taught everywhere he went with authority.


"What right do you have to do these things? If you have this authority from God, show us a miraculous sign to prove it." Jesus replied, "All right. Destroy this temple, and in three days I will raise it up." (John 2:18, 19; NLT)


We know Jesus meant his death and resurrection when he talked about destroying the temple. That was the sign he gave to to those who demanded one.

Much of what Jesus did provided evidence that he was the long awaited Messiah, the Son of God. But the ultimate sign, the one he said would offer the final proof of his authority, is the resurrection.

All the miracles Jesus performed, all the teachings he taught, and even his death, meant nothing without the resurrection.

If Jesus didn't rise from the dead we are still in our sins, and we are wasting our time.

Here is the point. The central truth of Christianity is not the cross, but the resurrection.

Just as the covenant established at Sinai gave meaning and significance to everything which happened before it, the resurrection gives meaning to everything Jesus did before his death. All the teachings and miracles find there meaning not Jesus' death, but his resurrection.

The Resurrection of Jesus is what gives meaning and hope to Christianity.

What does that mean for us?

Often we talk how Jesus' death was the sacrifice for sin. In some mysterious way the crucifixion of Jesus absorbed the wrath of evil and sin, and that is a wonderful truth that is worth celebrating.

Yet, without the resurrection, Jesus' death was just another sad reality of cruelty of the Roman Empire. The resurrection declares that all Jesus said and did was true. We can be confident that our sins are forgiven because the cross leads to an empty tomb. The resurrection promises new life and a better tomorrow.

The resurrection is what sets Christianity apart from other religions and philosophies of the world. It is the evidence that needed to verify the validity of the teachings and put confidence in the promises.