An Example for Others 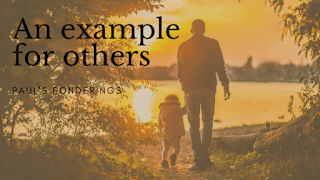 A fundamental belief that I have is: How we live our lives reflect what we truly believe.

This is why faith is more than just what we believe. Faith encompasses our actions as much as it is about our beliefs. The reason that our beliefs are important is the way they influence our actions.

When our beliefs simply remain truths that we agree with they make little difference in our lives. It is when those believes affect our actions that they take on a greater significance.

Abraham, the great example of faith, was credited with righteousness because his belief in God was made real by the way he trusted God with his life. We can say we believe in God, but if that belief isn’t manifested into action then we really don’t have faith.

Faith is about applying what we believe to the way we live.

This is why James wrote: "For as the body apart from the spirit is dead, so also faith apart from works is dead" (James 2:26; ESV).

Our belief maybe the root of faith, but our actions (the way we live) are the stem and branches of faith. Faith requires both.

Why is this important?

It is important because it reminds us that our faith is not a simple matter of personal preference. A person who faithfully follows Jesus is an example for others to follow.

The people who have influenced you the most are not only people who taught  you true things, but also applied those truths to the way they lived. Their lives validated what they taught.

In the Gospels we discover a group of people who were not interested in being a good example for people to follow. Rather, they were interested in impressing other people with how "righteous" they were.

The Pharisees were the religious teachers of Jesus’ day. They interpreted Scripture for people and taught them how it applied to their lives.

Yet, they missed a key component in their teaching—they didn’t live it out in their lives. People were impressed by their religious piety, but people were also discouraged because they knew they couldn’t achieve that level of “righteousness".

It was on this point that Jesus confronted the Pharisees.

Then Jesus said to the crowds and to his disciples:


"The scribes and the Pharisees sit on Moses' seat, so practice and observe whatever they tell you—but not what they do. For they preach, but do not practice. They tie up heavy burdens, hard to bear, and lay them on people's shoulders, but they themselves are not willing to move them with their finger" (Matthew 23:1-4; ESV)

Jesus told the crowd that the Pharisees had bad faith, not bad theology. He urged people to listen to the Pharisees' teaching, but discouraged them from following their example.

We need to keep in mind that there are two parts to effective teaching—explaining truth and letting that truth be seen in your life. When our lives do not reflect the truth of the Gospel, those closest to us will wonder whether or not it is really the truth.

The best evidence for the truth of the Gospel of Jesus Christ are the faithful lives lived by His followers. When we live faithful lives we make the teachings of Jesus real and accessible to the people around us. Without living examples, Jesus’ teachings remain a philosophy rather than becoming a way of life.

Having the truth doesn’t do us, or anyone else, any good if we don’t apply that truth to our lives.

The life of faith is the life that is lived based on the truth that we know.

Faith happens when we live our lives in the light of what we believe. A life that is lived by faith is a life that provides an example for others to follow.
at April 23, 2020