"We're losing the war for truth. There's no bigger crisis for media, politics and society than the growing number of people who don't believe facts and verifiable figures. If we don't collectively solve this, we are all screwed."

People, and I think Christians especially, should strive to be on the side of truth.

Yet, that goal is not always as easy as we make it out to be. I believe we need to think about how we come to know truth.

Ask yourself the question: “How do I know my beliefs are true?”

For most of us, what we believe to be true we have received second hand, from a source that we trust. The problem really isn’t a “war for truth,” but a disagreement on what sources can be trusted.

Let me also say I dislike the use of the word “war.” We tend to use this word to show there are two distinct sides that are at conflict with one another. So we have things like the drug war, the war on poverty, the war on Christmas, and the war on Terror. On the one side you have the “good guys” and on the other side you have the “bad guys.”

Do you see the problem with this belief? 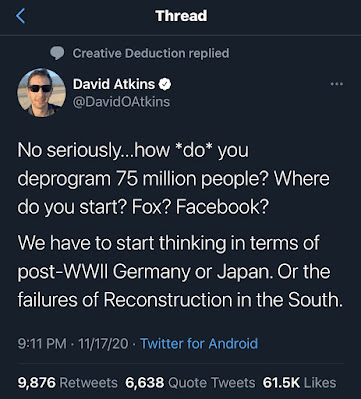 No seriously, when you think you need to “deprogram” friends and neighbors because they don’t think like you, you have lost the chance to have a civil conversation.

You can’t take the moral high ground if you want to cast other people (people who are often friends and family) as your enemy. No meaningful conversation is going to come from that.

After all, who gets to decide what is true and what is not true? Why should I accept your version of truth?

Everyone believes they know what the truth is, but their versions of truth differ because they have chosen to trust different sources for the information that makes up that truth.

Again, this is the key issue: “What sources can I trust to provide me with true information?”

While you may trust what is printed in the newspaper or is on the evening news, not everyone does.There is a significant percentage of people in the United States who believe they cannot trust what comes out of the corporate press. 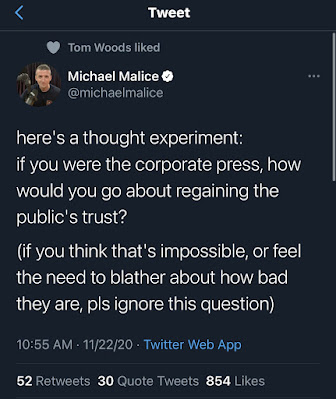 If you don’t understand that the corporate press, the source of information many Americans trust, has lost the trust of many other Americans, then you are going to see this as a “war for truth.”
It is not.
Therefore, rather than treating it like a war, we need to have a discussion about why we trust the sources of information that we do.
Why would some Americans not trust the information offered by the government and the corporate press?
Thaddeus Russell tweeted this: 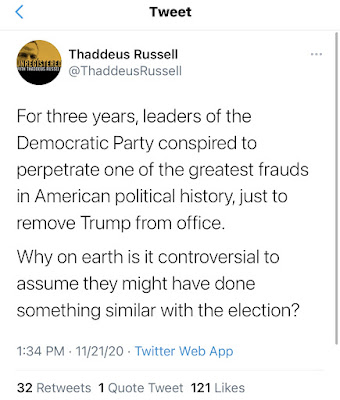 This is just one example of why many people don’t trust the same sources of information that you do.
The problem isn’t that there are Americans who are ignoring “facts and verifiable figures,” rather the issue is that they don’t think those facts and figures can be trusted. In other words, it is less about the information, and more about the source of that information.
So Michael Malice’s question is a good one: “What can the corporate press do to regain the trust of the public?”
Rather than starting a war, maybe you should ask that simple question first.

I don’t remember the last time I listened to Rush Limbaugh. That might come as a surprise for people who knew me in high school and colleg...