The Way of Jesus 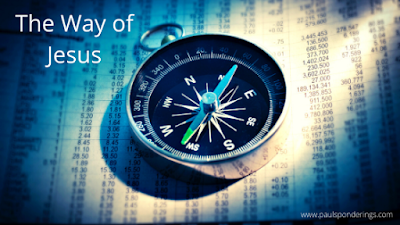 We are told that we are living in a divided nation.

The corporate press tells us about the extreme differences of the right and the left and how it is impossible for them to see eye to eye.We hear about one group of Americans is telling another group that they are racist and sexist because of the way they voted. We hear the other group of Americans respond by saying the new president elect is corrupt and will further destroy the foundations of the country.

The deep divisions that make up the very soul of American political life are on full display. There is no getting around the reality that there are two vastly different visions for the United States.

On the one hand you have people on the left who declare that equality is the value that must guide us into the future.

On the other hand you have people on the right who declare that we must remain true to the principles and traditions that the United States was founded on.

Each side views the other with skepticism, derision, and intolerance.

If you have spent any time on social media you know the names and the accusations that are being flung back and forth: “You are ignorant!” one side screams and the other side fires back, “You are a bigot!”

It it is a fruitless exchange as nothing gets resolved and blood pressures rise.


All you want is unity, but you are told that unity is impossible because those people on the other side are terrible people.

What are followers of Jesus Christ to do?

It may sound simple, but it is not simple to do.

There are going to be people on both sides of the aisle declaring that this or that is the most important thing and that is what deserves our attention. Many of these people will invoke the name of Jesus to try to convince us that their side is the one we must choose.

When we pick a side in this political war we simple give into the hate and the division that continues to tear apart relationships, families, churches, communities, and countries.

There is a better way, and that way is the way of Jesus.

For you are all children of God through faith in Christ Jesus. And all who have been united with Christ in baptism have put on Christ, like putting on new clothes. There is no longer Jew or Gentile, slave or free, male and female. For you are all one in Christ Jesus. And now that you belong to Christ, you are the true children of Abraham. You are his heirs, and God's promise to Abraham belongs to you. (Galatians 3:26-29; NLT)

Unity is possible. It is the product of people who are rallied around a common idea, purpose, or person. Unity is achieved in football stadiums and concerts. People brought together because of their shared love for a team or a band.

This type of unity is flimsy and cannot survive the constant threat of division. This threat comes from the powers that constantly look to divide people into different groups.

There is only one power that is great enough to overcome these wall building powers, and that is the power of Jesus. According to the Apostle Paul, Jesus is to be the rallying point that brings true unity.

Jesus came to tear down walls. That can only be accomplished when we have our faith in him.

Within his small group of 12 disciples Jesus had at least two men who were on the opposite ends of the political spectrum. There was Simon the Zealot who wanted nothing more than to fight against the Romans and restore Israel's independence. There was Matthew the Tax Collector who believed that compromise with the Romans was the best policy.

Jesus united these men with a common purpose.

How did he do that?

Jesus rejected the politics of the world.

Satan offered Jesus the keys to all the kingdoms of the world, but Jesus held fast to God's way to bring redemption to creation (Luke 4:5-8). After his miracles of healing and feeding the crowd wanted to make Jesus king, but Jesus withdrew to the wilderness (John 6:15). The crowd shouted hosanna and proclaimed Jesus king as he rode into Jerusalem, but Jesus stopped and wept over the city because they missed his true identity (Luke 19:41-44).

Jesus came to establish God's Kingdom, but he rejected politics as the way to accomplish this task. He called his followers to make disciples of the nations, not by the power of the sword (the true power behind politics), but the power of sacrificial love.

The way for the Church to be the starting point for unity is for Christians to follow the way of the Lion, who became a lamb, who was slain (Revelation 5:5-6).

We are saddened by the deep divide that exists in our country.

Healing can only happen if we reject politics and follow Jesus.