I don’t remember the last time I listened to Rush Limbaugh.

That might come as a surprise for people who knew me in high school and college. Back then I was one of the biggest “ditto heads” around.
I started listening to Rush shortly after his show was nationally syndicated. My dad had WHO (the great radio station from Des Moines, Iowa) on as we worked around the farm, and that meant everyday at 1pm we would listen to The Rush Limbaugh Show and for 3 hours the Doctor of Democracy taught me what I needed to know to be a good conservative in the United States.
One of the things I have grown to appreciate about Rush was his ability to hold the attention of people for 3 hours on the radio. Being a pastor I put together sermons and lessons, and what Rush did everyday was amazing. There is no way I could go on the air 5 days a week and fill a 3 hour slot and make it interesting. The skill Rush had on the radio was amazing.
He basically invented political talk radio and became the first real conservative voice in the country. The secret to his success was that he was engaging and entertaining while providing a narrative the lined up with a more conservative worldview. This was a worldview conservatives felt was under represented in the main stream media.
The things that I learned from Rush are:
There is no doubt that my intellectual and political life was influenced by Rush. I listened to him during those years that many of us start to think for ourselves and form our own opinions. I am grateful for the positive influence that he had that still lingers in my life today.
I have tried to recreate my journey away from conservative Republican to the Christian anarchist/libertarian view I hold today and I can't with any accuracy. The dates and specifics are jumbled in my mind. So I am not entirely sure what caused me to turn Rush off.
I do remember four reasons why I stopped trusting what Rush said on air.

There was a good 12 year period in my life when Rush Limbaugh was the major intellectual influence in my life, especially when it came to politics. There was another 3 or 4 years as I gradually stopped paying attention to what he had to say. In the last 12 years I haven't listened to him at all.

From this perspective I see Rush as a very flawed man who struggled with relationships and addiction issues, yet who had the strength and perseverance to continue to do a radio program while loudly being denounced by his critics and facing some major health problems. He had the talent to make politics engaging and hold people's attention for three hours a day, five days a week.

Rush became the voice for people who felt like their principles and beliefs were under represented in the mainstream press. He became the leader of the opposition in a world of progressivism. After all, that is what conservatism is: opposition. It opposes the changes offered by progressivism.

Though I a grateful for the influence he had on me and my thinking, I had moved on from Rush. In the end there are too many differences in our thoughts for me to call him a hero. He was a radio legend who brought  thousands of hours of enjoyment to millions of people and for that he deserves respect.

We are created in God’s image. The main point of that reality is that we are to be God’s representatives in the world. I like to say, “We ar... 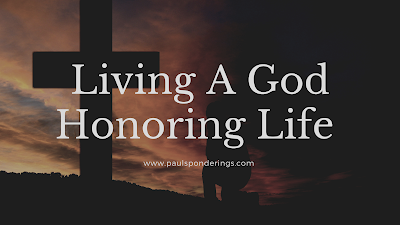