Don’t be Lazy in Your Thinking 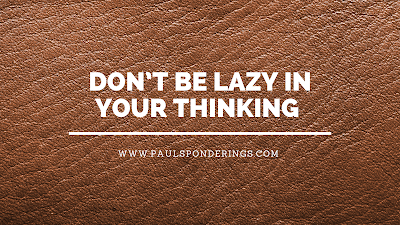 a room with sound-reflecting walls used for producing hollow or echoing sound effects —often used figuratively, “Living in a kind of echo chamber of their own opinions, they pay attention to information that fits their conclusions and ignore information that does not.”

To say that we live in echo chambers means that we live in an environment where our worldview is endorsed and confirmed rather than challenged.
I know why we prefer the echo chamber. It is hard word to defend our worldview and think through our beliefs. We would rather be told that we hold the correct beliefs about the world.
Unfortunately, that causes us to miss out on what other people are truly saying. Often, it positions other people as the enemy because they have an opposing view than what we have.
Preston Sprinkle offers some good advice.

I think it is helpful to remember two very important points.
Read books, or listen to, people who don’t think like you.
Not only will you be better equipped to handle their arguments, you might just learn a thing or two along the way.
at September 01, 2021