Violence is not the Answer 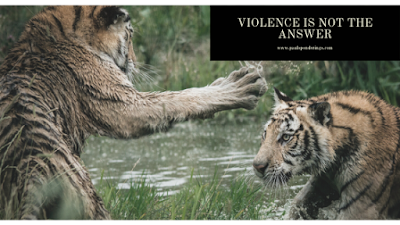 I originally wrote this three years ago. Given what is happening in some of the major cities here in the United States, I think it bears reposting.

Ever since the tragedy of Charlottesville there has been something that has bothered me.

My great concern is not the presence of Neo-Nazis, but the acceptance of aggressive violence as the means to silence other people.

Libertarianism isn’t about finding a middle ground between Democrats and Republicans, but about the proper use of violence. As the great libertarian thinker Walter Block states:

"Libertarianism is solely a political philosophy. It asks one and only one question: Under what conditions is the use of violence justified? And it gives one and only one answer: Violence can be used only in response, or in reaction to, a prior violation of private property rights."

In other words violence can only be justifiably used in self-defense. This ethic applies to both the State and individuals.

Not only am I a libertarian, but more importantly, I am a follower of Jesus Christ.
Jesus taught that his followers are to love and pray for their enemies. He forgave those who crucified him. He overcomes, not through violence, but through self-sacrifice. This is the example I am called to model.
To follow Jesus means I can’t respond with violence to people I disagree with, even when what they are advocating will harm society in the long run.

For me the idea of non-aggression is not some nice idea, but fundamental to who I am. It is a key part to both my political philosophy and my religious belief. God's kingdom is not enlarged nor is liberty expanded through violent aggression.

Know this: if you advocate punching Nazis or Communists or White Supremacists simply because of their beliefs, you are living in opposition to the way of Jesus and you are an enemy to liberty.
Violence is not the answer and that is why I am equally opposed to Neo-Nazis and Antifa, who both advocate its use to promote their political philosophy.
at September 01, 2020