Not Voting is a Legitimate Option 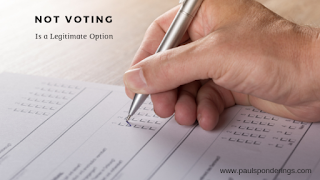 In the United States voting is viewed as a patriotic duty and a sacred right. We are taught about the importance of voting starting in elementary school. The lesson we are to learn is that voting is the way have a voice in government.

Therefore it is not surprising that many of us have equated voting with freedom.
"A free people are able to able to elect their leaders," we believe.

With this being a fundamental belief, for someone to even suggest that is is okay not to vote is viewed as heresy.
The counter arguments are: "Don't you know people died to give you the right to vote!?" and "There is so much at stake in this election. You have to vote!"

With that being said, let me offer a dissenting view. It is okay not to vote.

Our God -given rights are not protected through the process of voting.

In fact, I would argue that voting has been the process that has enabled our rights to be taken away.
As Ron Paul wrote in his book Liberty Defined: "American political culture unfortunately, has come to worship at the altar of democratic majoritariansim." (p. 67)

What happens is that whatever party wins the majority, they believe they have a mandate from the American people to run the country. Rather than protecting the individual rights of citizens and upholding the Constitution, they embark on a mission to do what is "best for the nation."
Usually this leads to unintended consequences (foreign policy blowback and crushing debt) and a larger and more intrusive government.

I believe that it is through the protection of personal liberty, following constitutions (state constitutions and the federal constitution), and adherence to free markets that create the best society this world can offer. In fact, there is a connection between freedom and prosperity .

By saying it is okay not to vote, I am not advocating laziness or disengagement from the political process, rather, I am saying "don't compromise your beliefs."
Voting will not protect freedom and a vote for the "lesser of two evils" is still a vote for evil.

Here are some reasons that justify not voting:


I am not saying voting is evil, nor am I asking you not to vote.

What I am saying is that there is no reason for a Christian to support a party or a candidate that doesn't adequately represent them.

It is also important to note that an informed non-vote is still a vote. When I don't vote I am saying, "You don't deserve to represent me."

If you feel that you should vote, go ahead and vote, but don't belittle those who have made the choice not to vote. After all, that is their vote.
at November 06, 2018