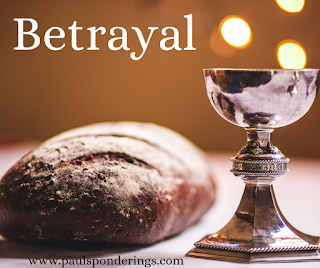 The starting point for Good Friday is the betrayal that happened on Thursday. It was the choice of
Judas to betray Jesus that sent in motion the final hours of Jesus' life.

Why did Judas make this choice?

We cannot know for certain the thoughts Judas had in the days leading up to Passover. I still think it is safe to speculate that, like humankind's first betrayal of God, Satan twisted Judas' thoughts and desire to the point that the betrayal of Jesus seemed to be the logical thing to do.

My guess is that he thought he was setting in motion the means for Jesus to declare himself as King and for Israel to rebel against Roman rule.

Things didn't turn out as planned.

I think it is important to remember that Judas wasn't the only one to betray Jesus that night.

When push came to shove, when Jesus clearly revealed that there would be no fight to prevent his capture, the disciples scattered.  Two disciples follow from a distance, but one of those disciples, Peter, denied knowing Jesus three times.


Before we judge these first disciples too harshly let us remember we too have betrayed Jesus. Like Peter, we too have denied Jesus.  We are not that much different.


How have we betrayed Jesus?

We can focus on our sin, but there are also more subtle ways we betray and deny Jesus.

We, like the disciples, often look to politics to usher God's Kingdom into the world. We adopt ways of living that is conformed to the ways of the world rather than following Jesus. We pursue a life that is filled with busy-ness and eats up our resources so which prevent us from being generous with the gifts God has given to us.

Romans 5:8 says: But God showed his great love for us by sending Christ to die for us while we were still sinners. (NLT)

To be sinners means, not only have we  broken of God's law, but we are also God's enemies, traitors of His Kingdom.

With this background of betrayal and treachery, how did Jesus respond to his disciples?

Now as they were eating, Jesus took bread, and after blessing it broke it and gave it to the disciples, and said, Take, eat; this is my body.  And he took a cup, and when he had given thanks he gave it to them, saying, Drink of it, all of you, for this is my blood of the covenant, which is poured out for many for the forgiveness of sins. I tell you I will not drink again of this fruit of the vine until that day when I drink it new with you in my Father's kingdom. (NLT)

In the face of betrayal and treachery of his creation, his disciples, and his closest friends, Jesus paused and declared that he was making a new covenant.  He announced that was not abandoning them to Satan, sin, and death.  Jesus made a promise, sealed with his  blood and death, that no matter who we are or what we have done, we can be numbered among God's people and be counted as loyal citizens of His Kingdom.

This is why I believe communion is an important of our reflection on the darkness, the sin, the treachery, the agony, and the death associated with Good Friday.

Not only does communion remind us of Jesus' commitment, but it also provides us with an opportunity to declare our loyalty to him.

My prayer is that today you will consider the ways you have betrayed Jesus. But don't stay there. Ask Jesus for forgiveness, declare your commitment to him, and seal your promise to him through taking the Lord's Supper.

Communion is the reminder that God's faithfulness is greater than our betrayal.
at April 19, 2019

Email ThisBlogThis!Share to TwitterShare to FacebookShare to Pinterest
Labels: Communion